eye’s ache.
it is fine in the morning, but the symptoms worsen when he works.
it was painful last night, too. especially at night, it hurts like every night.
he went to the eye doctor and had an examination, but no abnormalities were found.
the doctor told him to change his glasses.
the back of his eyes is particularly painful.
his neck has always been stiff, and his shoulders sometimes hurt when he turns them around.

it has been a symptom since last year, and it is bothering him at work.
since he works by himself, he is worried about the symptoms that appear every night.

based on the results of palpation, trigger points were almost definitely formed in the occipital bone attachment area of the semispinalis muscle and the suboccipital muscle group behind it, and i judged that the pain behind the eyes was coming from there and treated it.。

as for the craniosynostosis muscle, from the 1st to the 5th treatment, i used thin acupuncture needles with a smaller amount of stimulation and a larger number of needles.
this is because we judged that the stiffness had been there for a long time, and we thought it would be better to aim for a gradual process rather than aiming for a sudden relaxation, so that there would be no burden on the body.

after the 6th treatment, when the semispinalis muscle of the head had loosened up, i started to treat the suboccipital muscle group.
at this time, the subjective symptoms started to decrease little by little.
after about 10th treatment, the symptoms were almost gone. the symptoms seemed to disappear after a few treatments.

the truth about the neck

the muscles in the neck are much thicker than you might think.
because the muscles are folded and attached to the neck to perform various movements.
in the case of the lower back, each muscle is thick and deep, but in the neck, many muscles come together to create depth. 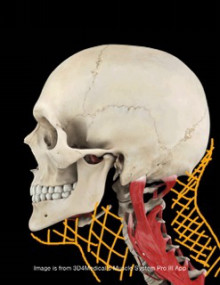 look at the neck from the side and add the skin.
then you can see the thickness of the muscles as shown above.

the human head weighs about 6kg.
the neck, which is constantly supporting this weight, is under a lot of strain just from daily life.
especially in situations where you don't move your neck much, such as when working on a computer or using a smartphone, it is essential to have poor circulation.

people who are not aware of the stiffness can suffer from headaches, autonomic nervous system symptoms, and other complaints.
the pain behind the eyes this time is also a message that "your neck is stiff" or "there is a trigger point in your neck.