slight pain in urination and pain in the groin.
an ultrasound examination revealed an enlarged prostate. the doctor diagnosed him with prostatic hypertrophy and prostatitis.
he has been taking antibiotics. however, there has been no improvement and the painful urination has continued for a long time.
recently, he switched to chinese herbal medicine because of the poor healing.
he came to our clinic after hearing from a friend that acupuncture could help with these symptoms.

we treated the experience that these symptoms are caused by trigger points in the lumbar region, hips, and hamstrings.

1st to 3rd treatment: no change in symptoms, but muscle tension was getting relieved.
4th to 10th treatment: the pain in the groin area decreased and at the same time, the pain of urination disappeared.
11th to 15th treatment: due to the improved blood flow in the lower part of his body, he no longer feels the coldness and swelling in his legs that he used to suffer from.

acupuncture for prostatitis and enlarged prostate

acupuncture is often used to treat prostatitis and enlarged prostate. 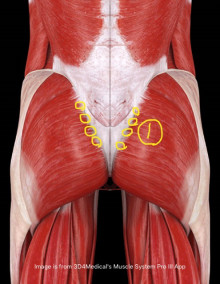 the first trigger point treatment is trigger points formed at the attachment of the lateral sacral border of the gluteus medius muscle. 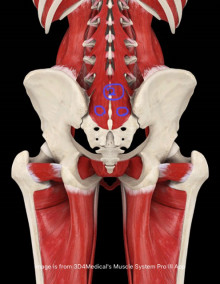 the second is the lumbar multifidus muscle located in the deepest part of the lower back, above the sacrum.
when this area is treated, there is often a sense of awareness in the affected area. 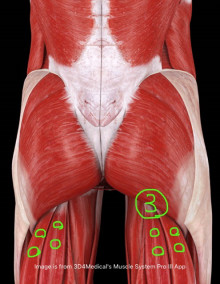 the third is the upper part of the hamstrings.
in addition to the points shown in the figure above, trigger points near the sciatic tuberosity of the hamstrings may also be treated at the same time.

these three points are effective treatment sites for prostatitis and enlarged prostate.

they are also effective for other conditions such as cystitis.
in cases of repeated cystitis (including aseptic cystitis), symptoms often improve when this area is treated thoroughly.