pain in the neck. the neck hurts, and dizziness is strong when she looks down. the autonomic nervous system is also disturbed, and stomach discomfort persists. no appetite. cannot sleep.
a few years ago, she was hit from behind and injured her neck. at that time, she received only massage therapy and electric therapy, and finished the treatment with some anxiety.
this is the second accident, and the symptoms are worse than the last. as before, she received electric therapy and massage therapy, but her symptoms did not improve.
dizziness was strong, and she felt sick when she looked down while cooking. no appetite.
sometimes she gets dizzy suddenly and continues to feel uncomfortable.

i wrote a letter of referral to the doctor and asked him to agree to the need for acupuncture treatment, because i judged that the symptoms were caused by trigger point activity deep in the neck due to the second traffic accident and that electrotherapy and manual therapy would not improve the symptoms.
since she was not accustomed to the stimulation of acupuncture needles, she was treated with thin needles.

after several treatments, the symptoms seemed to disappear.

be careful about whiplash after the second time.

i apologize for the inconvenience, but i will explain with my own poor drawing. 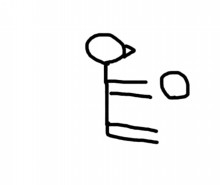 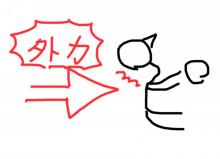 2) when you are hit from behind

at this time, the neck is hyperextended. 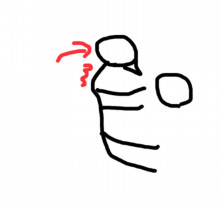 3) diagram of reaction and return

hyperflexion of the neck occurs as a reaction to hyperextension. 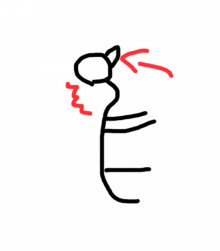 4) further hyperextension by the reaction.

if you know you are going to be hit, you can position yourself, but if you are hit from behind, you cannot position yourself, so your neck repeats hyperextension, hyperflexion, and hyperextension.
as a result, not only the superficial muscles but also the deeper muscles become sore.
when some external force is applied, people unconsciously exert their muscle power.
excessive muscle tension causes the formation of trigger points.