sciatica and pain behind the knee that has lasted for 13, 4 years

sciatica and pain behind the knee that has lasted for 13, 4 years

since his 40s, he has always had pain from his left hip to his hamstrings. in severe cases, numbness sometimes persists.

his occupation is a rescue worker, and he trains daily, but since the onset of this symptom, he has been unable to train his lower body.

he trains only his upper body. it is hard for him to train hard.

he has received many treatments from orthopedic surgeons, acupuncture clinics, etc., but there has been no improvement, so he has given up halfway.

this time, he came to our clinic through a strong introduction from one of our patients.

when he was in a face down position, he was reluctant to flex and shorten his hip joints and hamstrings, so i suspected that he was unconsciously stretching his muscles and focused on acupuncture.

considering his longstanding symptoms and work environment, the first treatment was aimed at "removing muscle swelling" from points on the lower body.

in the case of longstanding symptoms, it is difficult for acupuncture needles to hit the points due to the muscle swelling.

1st treatment: a wide area was treated with thin needles. the feeling was dull.

2nd treatment: as expected, the symptoms did not improve, but palpation and acupuncture gave him a more resonant sensation than the previous treatment. i used 0.2mm needles to stimulate the points and was able to approach the triggers responsible for the recognition sensation.

3rd treatment: the symptoms that had persisted for many years began to change, and he began to feel a sense of numbness and a physical state that allowed him to exercise. at this time, i started to teach him how to exercise.

4th treatment: the pain was almost gone, and he started lower body training, which he had not been able to do before. he is now able to push himself harder and do strength training.

he is determined to revive his weak muscles and "get back to the field! he is now undergoing maintenance treatment…

for longstanding symptoms, it is important to find and treat the "blind spots" that have not been treated before.

at the same time, although it is rare for there to be "dull pain behind the knee," an approach was taken to the "femoral attachment" of the gastrocnemius muscle, which is the triceps muscle of the lower leg. 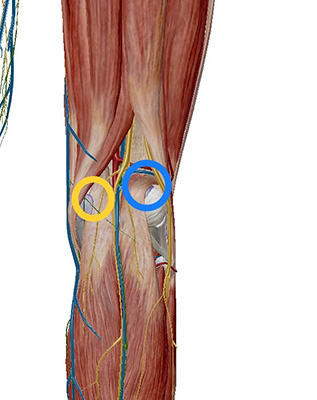 in this area, he was able to recognize the dull pain behind the knee and the pain disappeared.

the more severe the symptoms are, the more the therapist tends to think, "i have to get results in one treatment". however, the longer the symptoms have been present, the more systematic the treatment must be to cure them.

in this case, because of the strong myxedema, the first treatment focused on "creating an environment where the acupuncture needles will resonate next time", and the second and third treatments directly led to good results.