about 4 months ago, she started experiencing throbbing pain from the back of her left hip to the outer side of the hip joint to the shin area. the pain is worse when she walks or stands, and it is worse on rainy days.
she has been doing ballet for the past 15 years but has recently taken a break due to the pain. she usually works at a desk and sits for a long time, and sometimes feels pain in her sciatic area.

there was no abnormality on visual observation, but on palpation, there was tenderness in the left sacroiliac ligament and a strong muscle stiffness in the gluteus medius muscle, which caused recognition sensation on palpation.
in addition, cognitive sensation was also observed in the tibialis anterior muscle.

she had received acupuncture at other clinics before, and at that time, she was sensitive to stimulation to the point of breaking out in an over sweat, so this time we used thin needles and adjusted the amount of stimulation.
because of her strong symptoms, we initially treated her twice a week.

・・・no sweating occurred during the acupuncture insertion, and the pain decreased in the morning of the next day after the 1st treatment. however, because of the typhoon, the pain seemed to return to normal. reproduction of pain due to climatic changes is a characteristic of trigger points, which have a large effect on the autonomic nervous system.
pain scale 10→7

3rd-4th treatment → 25 needles 50mm gauge 0.16mm. in addition to the above areas, the gluteus maximus and sacral tuberosity ligament were treated.

・・・she got used to the feeling of the acupuncture needles, and the pain was reduced to half, but it still varied.
pain scale 7→5

5th-10th treatment → 25 needles 50mm gauge 0.16mm. in addition to the above areas, gastrocnemius muscle was treated. the distribution of the number of needles was adjusted according to the condition of the day.

after the t 10th treatment, she recovered to the level where she could take ballet lessons all the way through. 5→3 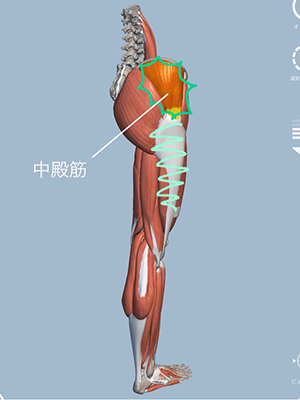 when trigger points form at here, they can cause pain on the outside of the hip joint and numbness on the outside of the thigh, which can be misdiagnosed as sciatica. in this case, she did not have any numbness, but she had formed quite a stubborn stiffness, probably because she had been doing ballet for 15 years. the gluteus medius muscle is an important muscle for walking and is always under a heavy load. because it is a thick muscle, acupuncture is a shortcut to getting better by getting the right points and treating them persistently.