headache, anxiety, and sleeplessness.
she used to have headaches, but recently she suddenly started to have unbearable headaches frequently.
she had been taking painkillers, but the symptoms became so severe that the medication did not work. she is also raising a child and does not have time to relax. she is also nursing a child and has trouble sleeping at night. recently, she started to have sudden anxiety and panic attacks, so she went to see a specialist. she was given medicine, but she was resistant to it, so she was watching the situation.
she was introduced to our clinic by a friend of hers and came to our clinic.

No problem was found on visual observation.
on palpation, there was abnormal tension at the occipital stop of the right temporoparietal muscle.

her body was in a state of sympathetic nervous tension, so she did not feel stiffness and various complaints appeared.
in this case, with each treatment, she started to feel stiffness that she had not felt before, so we started the treatment with low stimulation and thin needles.

1st time: feeling a little better, from 10 to 8.
2nd time: started to feel strong stiffness in the right cranial platysma. it was more uncomfortable than before the treatment. 8 to 15
3rd to 4th time: as expected, the stiffness began to be felt strongly, so a direct approach to the area was started. the stiffness gradually decreased from 15 to 10
5th time: 10 to 5. symptoms were reduced to half.
6th session: 5 to 1. symptoms were almost in relief. the pain near the occipital bone attachment of the right scalene muscle also disappeared. at the same time, the symptoms of anxiety, headache, and insomnia disappeared. although it was sometimes difficult for her to sleep due to child-rearing, she was able to relax more than before.

after a few treatments, the symptoms seemed to disappear.

you start to feel the stiffness that you don't feel.

when you are parenting, you are very busy.
as a result, the body is in a state of sympathetic nervous tension and is constantly fighting.
this causes the body to lose awareness of its own condition, which in turn causes the autonomic nervous system to lose its balance and various complaints to appear.
in this case, even though there was obvious tenderness, it was at such a low level that the patient did not recognize the point. therefore, we conducted the treatment with the patient's understanding that the symptoms might worsen a little in the early stage of treatment. 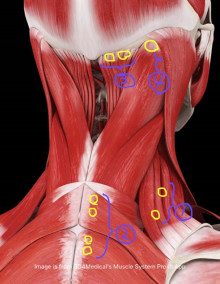 especially during seasonal changes such as spring and autumn, it is not uncommon for symptoms to progress without the body being aware of it.
it is important for the therapist to be aware of the symptoms and provide appropriate guidance.